That just came out of one of our 7-year-old’s mouth when he got upset at another kid who stole his animal crackers in the children’s home. He grabbed some heavy stones and started throwing them towards the other child.

One of the stones smashed into our Honda Pilot’s window, and another one into the window of a parked taxi. Two smashed windows within 15 seconds. Luckily, nobody was hurt this time.

Events like this are the daily occurrence at our children’s home. Most of these kids lived on the streets or in the overcrowded state orphanage where they were forced to fend for themselves.

Their aggression and anger is like a virus. For years, it had a chance to build up in every corner of their tiny bodies.

We’ve noticed that physical activity helps the kids in many ways. We have daily soccer practice, weekly tournaments, a volleyball net, and 3/week basketball practice. We even built a 2nd soccer field in Villa Soleada designed just for the kids.

Since we’re willing to try just about everything, we’ve enrolled the kids in an MMA/kickboxing gym here in El Progreso. The kids are going to train 3/week and learn Muay Thai, boxing, and Brazilian Jiu Jitsu.

Coach Eddie is a heavily built Puerto Rican who grew up in the Bronx and moved down to El Progreso after marrying a Honduran.

“I grew up in a very rough and violent place. Probably even worse than Honduras. Bloods, Crips, Latin Kings everywhere. I almost ended on the streets as a teenager, but luckily, one of my buddies invited me to go to his Brazilian Jiu Jitsu gym one day. I had no idea what that was. But after that day, there was no turning back. All my negative thoughts went out the window and I wanted to become a champion fighter.”

Now a professional MMA and Brazilian Jiu Jitsu fighter, Eddie has several trophies under his belt.

He is also an excellent coach because he understands exactly where these kids come from.

Normally these kids show very little respect to any adult or authority figure. But Coach Eddie won their respect instantly with his almost military like no-bull shit personality. He also knows when to throw in positive re-enforcement in his comments, “That’s a really great jab Fernando!! You’re going to be the next Oscar de la Hoya brother! Now give me 20 pushups!!”

He’s a scary looking dude, but I can tell he loves working with the kids and he really wants to help them. He is a wonderful role model to them.

Eddie’s gym has no money and equipment. He has 2 pairs of gloves for his 30 students. “I really want to see my gym succeed. I have been meeting with many businesses to see if they can help us with a pair of gloves, a mat, a medicine ball, anything. I will work day and night to make this happen, and now that these kids have joined us, I will work even harder.”

The kids have been loving the training. The twins have been getting up early each day to do pushups. Another kid has been practicing his arm-bar hold every night, instead of fighting the other kids. It has been a good influence so far!!

Did you know that Manny Pacquiao, the best boxer in the world, lived and slept on the streets of the Philippines as a child? He dropped out of school at a young age because of extreme poverty and had to leave the house. Even though all the odds were against him, he became a champion. 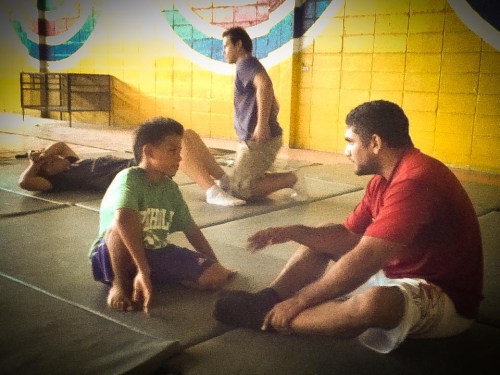 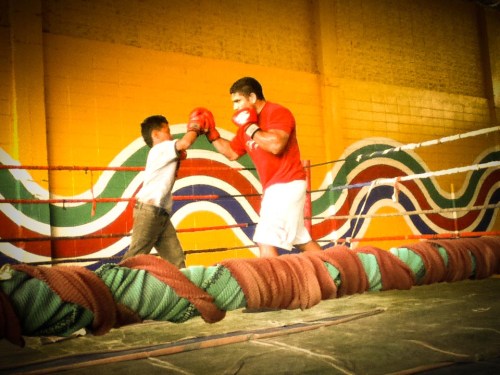